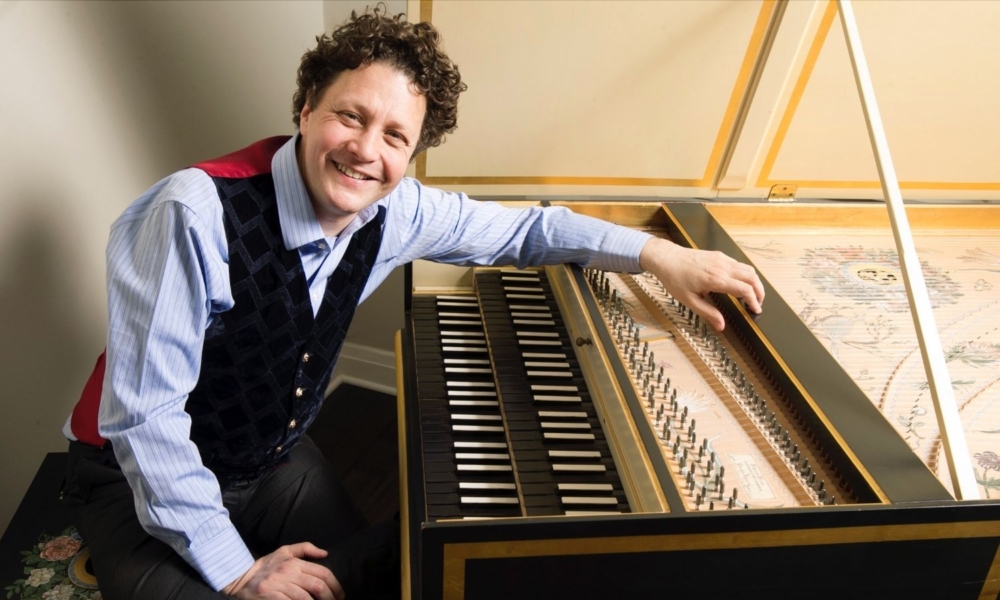 In difficult times we’re all seeking our old Joie de Vivre. What better tonic than a concert with Grammy nominee Jory Vinikour, renowned for his technical mastery, sublime touch, and ability to infuse music with the deepest sense of joy!

Jory Vinikour is recognized as one of the outstanding harpsichordists of his generation. A highly diversified career brings him to the world’s most important festivals and concert halls as recital and concerto soloist, partner to several of today’s finest singers, and as one of the most visible continuo performers. Born in Chicago, Jory Vinikour came to Paris on a scholarship from the Fulbright Foundation to study with Huguette Dreyfus and Kenneth Gilbert. First Prizes in the International Harpsichord Competitions of Warsaw (1993) and the Prague Spring Festival (1994) brought him to the public’s attention, and he has since appeared in festivals and concert series such as Besançon Festival, Deauville, Monaco (Semaine de la Musique Baroque), Cleveland Museum of Art, Miami Bach Festival, Indianapolis Early Music Festival, as well as in South America, Taiwan and Iceland.

A concerto soloist with a repertoire ranging from Bach to Nyman, he has performed as soloist with leading orchestras including Rotterdam Philharmonic, Flanders Opera Orchestra, Orchestre de la Suisse Romande, Lausanne Chamber Orchestra, Philharmonic of Radio France, Ensemble Orchestral de Paris, Netherlands Chamber Orchestra, Cape Town Symphony Orchestra, and Moscow Chamber Orchestra with conductors such as Marek Janowski, Armin Jordan, Fabio Luisi, Marc Minkowski, John Nelson, Gordan Nikolic, Constantine Orbelian, and Victor Yampolsky. He participated in a recording of Frank Martin’s Petite Symphonie Concertante with the Lausanne Chamber Orchestra under the direction of Armin Jordan (Suisse Romande, 2005), and also performed the Harpsichord Concerto by the same composer with the Symphony Orchestra of the MDR in Leipzig’s Gewandhaus under the direction of Martin Haselböck in January of 2003.

Well- known as an accompanist, he has appeared extensively in recital with artists such as David Daniels (European tour in 2007), Hélène Delavault, Magdalena Kozena, Annick Massis, Marijana Mijanovic et al.  He has accompanied legendary Swedish mezzo-soprano Anne Sofie von Otter in recitals in Sweden, Norway, Spain and Paris and at La Scala in Milan. With luthenist Jakob Lindberg, their programme of English and Italian music of the 17th century, entitled Music for a While was released by Deutsche Grammophon in early 2005.

Mr. Vinikour appears regularly as harpsichordist/ continuist at the Paris Opera, Netherlands Opera, Salzburg Festival, Teatro Real de Madrid, Glyndebourne, etc. and is heard on many recordings from Deutsche Grammophon, EMI, Erato, et al.  Jory is a regular presence at the Zurich Opera, and has appeared on their stage (disguised as Handel!) with Cecilia Bartoli in Handel’s Il trionfo del tempo é del disinganno. Jory Vinikour has been involved in the musical activities of the Château de Chimay (Belgium) since 2002, and is musical co-ordinator of the Baroque Voice Competition, held there annually.  He performed Stravinsky’s solo harpsichord part in productions of The Rake’s Progress at the Théâtre des Champs-Elysées and at the Paris Opera in the 2007-2008 season.

His recording of Bach’s Goldberg Variations, released on Delos International in 2001 received excellent reviews throughout the world. John von Rhein of the Chicago Tribune named it as one of 2001’s top ten classical CD’s, an honor that was also accorded to Mr. Vinikour’s recording of Bach’s seven harpsichord toccatas in 1999. Mr. Vinikour will release a double-CD collection for Delos International of Handel’s keyboard music at the end of 2008, followed by recordings of the keyboard music of Pancrace Royer and Jacques Duphly. He has given premieres recently of Régis Campo’s Perpetuum mobile, and Toccatas by Harold Meltzer, both written for him.

Recent appearances include a recital of Bach and Handel for Music before 1800 (New York), concerts (director and harpsichordist) with Musica Angelica in Los Angeles, and he appeared as soloist with the Orchestre de la Suisse Romande (Marek Janowski) and Cape Town Philharmonic. He also made appearances in Reykjavik (Salurinn concert series), participated in a recording of Handel arias with Mexican tenor Rolando Villazon and the Gabrieli Consort, directed by Paul McCreesh;  performances at the Piccolo Spoleto Festival, the Oslo Chamber Music Festival.  Upcoming performances include concerto performances with the Thüringer Symphoniker (Oliver Weder) and the Royal Scottish National Orchestra (Stéphane Denève), as well as a recording of the sonatas for flute and harpsichord of J. S. Bach with virtuoso Joshua Smith (Telarc 2009). Mr Vinikour was guest artistic director of the Austrian Baroque Academy in Gmunden, Austria for the summer session of 2008.

Gramophone: “Vinikour is such a perceptive artist, and is so superlative in technical accomplishment…”

Gramophone: “Vinikour’s performances are so buoyant, glistening or noble that you’ll likely find yourself glued…”

Christian Science Monitor: “Vinikour makes a concert an experience, in the very best sense of the word. His playing excites the ear.”