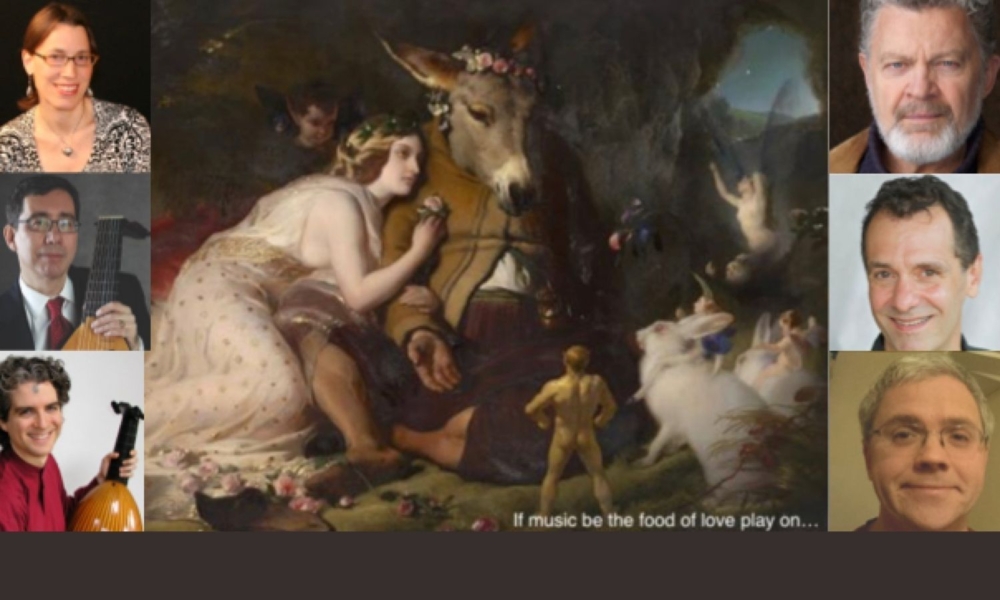 THIS CONCERT IS SOLD OUT. This magical evening presents selected recitations from some of Shakespeare’s best loved sonnets & plays set to music of the lute, recorder, virginal, harpsichord & voice.

Soul of the Age! (Ben Jonson, from the First Folio of Shakespeare’s plays)

Let me not to the marriage of true minds (Sonnet 116)

There’s fennel for you, and columbines (Hamlet, 4.5)

There is a willow grows aslant a brook (Hamlet, 4.7)

My mother had a maid call’d Barbary (Othello, 4.3)

We have heard the chimes at midnight (Henry iv, Part Two, 3.2)

Now is the winter of our discontent  (Richard iii, 1.1)

I am never merry when I hear sweet music (Merchant of Venice, 5.1)

THOMAS MORLEY: It Was a Lover (Reprise)

REBECCA PECHEFSKY – Well known in the New York area, Rebecca Pechefsky has performed in such venues as Carnegie Hall’s Weill Recital Hall, Merkin Hall, and the Morris-Jumel Mansion. She has also been heard in the concert series of the Miami Bach Society and the Harpsichord Center in Pasadena and Brentwood, California, as well as in fringe concerts of the Boston Early Music Festival and the Berkeley Festival. Recent European engagements include recitals in Milan (Sforza Castle, where she performed on an instrument dating from about 1600), Bologna, Amsterdam, Berlin, Basel, and London (Handel House). As part of the Krebs 300th birthday celebrations in Germany, she was invited to perform in Zwickau and Altenburg in 2013; in 2016 she performed with Elaine Funaro at the Estonian Harpsichord Festival in Tallinn. Among her recordings for Quill Classics are the complete harpsichord music of François d’Agincour; Bach and His Circle (JPF Music Award, Best Classical Solo Album); Bach’s Well-Tempered Clavier, Book 1, praised in Fanfare as “excellent to the highest degree”; and Johann Ludwig Krebs @ 300. Also committed to contemporary music, she has premiered works by Mary Inwood, Mark Janello, Graham Lynch, Frank J. Oteri, Louis Pelosi, Johnny Reinhard, and Ben Yarmolinsky, and can be heard on Beth Anderson’s new CD, The Praying Mantis and the Bluebird (MSR Classics). Currently organist at Redeemer Lutheran Church in Glendale, Queens, she lives in Brooklyn with her husband, Erik Ryding, with whom she coauthored the award-winning biography Bruno Walter: A World Elsewhere, recently issued in Japanese translation. Visit rebeccapechefsky.com.

SAM TSOUTSOUVAS  is a graduate of The Juilliard School, drama division Group 1. He has appeared on and off Broadway, in regional theater and on national tour, in film and television, and is a popular performer of recorded books. His Shakespearean roles include Hamlet, Hotspur, Coriolanus, Shylock, Brutus, Titus Andronicus, Antony (in Antony and Cleopatra), Leontes, Henry IV, Macbeth, Berowne, Benedick, and Petruchio (for Julie Taymor). He has also performed in several Jacobean plays and readings produced by the Red Bull Theater—including, in 2016, The Changeling by Middleton and Rowley (Charles Isherwood in The New York Times praised his “standout” performance writing, “Mr. Tsoutsouvas brings a commanding presence to Vermandero”); The Witch of Edmonton by Dekker, Ford, and Rowley; The Spanish Tragedy by Kyd; The Atheist’s Tragedy by Tourneur; and A Chaste Maid in Cheapside by Middleton.

ERIK RYDING – Born in New York City, Erik Ryding began playing the lute in his late teens, participating in master classes with Eugen Dombois in the Netherlands and later studying in Basel, Switzerland, with Anthony Bailes. In 1979 and 1981 he toured Germany, performing with the soprano Cornelia Praetorius. For years he taught English literature at Barnard College and elsewhere, specializing in the Renaissance, and he wrote his doctoral dissertation at Columbia on Renaissance music and poetry, a thesis later published as “In Harmony Framed”. With the soprano Amanda Sidebottom he formed Well-Tuned Words in 2011. The duo has performed on both coasts of the US as well as in Milan, Paris, Amsterdam, Basel, and Berlin. Erin Heisel, reviewing the Well-Tuned Words debut CD, Great Wonder, in American Record Guide, wrote of “Ryding’s beautifully played solos,” adding: “His playing … is unexpectedly warm and I wanted to hear more.” In 2016 he played in an ensemble of twenty lutes led by Paul O’Dette. With his wife, the harpsichordist Rebecca Pechefsky, he co-authored the award-winning biography Bruno Walter: A World Elsewhere (Yale University Press).

PHILIP ANDERSON – Tenor Philip Anderson has recently been touring the world in the Philip Glass opera Einstein on the Beach. He is much in demand among early music ensembles in New York and sings regularly with ARTEK and My Lord Chamberlain’s Consort. He has been a guest artist with Chatham Baroque, Lionheart, Mark Morris Dance Group, The New York Collegium, Orchestra of St. Luke’s, Piffaro, The Queen’s Chamber Band, and The Waverly Consort. He portrayed the title role in The Play of Daniel with New York’s Ensemble for Early Music. Philip made his Carnegie Hall debut singing Handel’s Messiah with the Masterworks Chorus. He appeared on Broadway in Coram Boy. His recordings include the Grammy nominated O Magnum Mysterium with the Tiffany Consort. On most Sunday mornings he can be heard leading the singing at the Church of St. Ignatius Loyola in New York City where he is the parish cantor. When not singing he grows vegetables in North Salem, New York.

CHRISTOPHER MORRONGIELLO – a former British Marshall Scholar, is a graduate of the Mannes College of Music, the Royal College of Music, and the University of Oxford, where he earned a PhD in musicology. As a recitalist, Christopher has performed to critical acclaim throughout Europe and the United States. In 1993 he was a prizewinner in the BBC Radio Two Young Musician of the Year Competition and in 1996 was awarded a Marco Fodella Foundation Scholarship for studies and research in Milan, Italy. In 2006, the Lute Society of America conferred upon him its first Patrick O’Brien LSA Seminar Lectureship. Heralded as an innovative music director and creator of large-scale dramatic works, Christopher has a gift for bringing music of the Renaissance and Baroque to life in its literary and social context. His musical portrait of the Elizabethan muse and songstress Penelope Devereux, created for soprano Emily Van Evera (My Lady Rich, Avie Records 0045), has been described by Renaissance Magazine as “a presentation of unusual quality and beauty” and by The New York Times as “an inspired idea … a vivid and touching portrait.” Christopher is a member of the Venere Lute Quartet and ALBA Consort, performs regularly with sopranos Marcia Young and Alexandra Olsavsky, and directs the New York–based Bacheler Consort. Recently, the Metropolitan Museum of Art produced several beautiful video recordings of his playing on a gut-strung, sixteenth-century lute as well as on copies of lutes in their priceless musical instrument collection.

GREGORY BYNUM (recorder player) has received fellowships to study in England and at the Amherst Early Music Festival in Massachusetts.  He has studied recorder with Marion Verbruggen, Han Tol, Matthias Weilenman, Matthias Maute, and Pamela Thorby; and has performed with Brooklyn Baroque, with members of the Yale Music faculty including Jaap Schroeder, and with faculty members of the Mannes College of Music and the SUNY New Paltz Music Department.  Mr. Bynum has taught at the Bloomingdale House of Music in Manhattan and in the music program at the Center for Creative Youth in Middletown, CT.  His past performance venues include the Middletown, NY Thrall Library; the historic Old Stone House in Brooklyn; Morris-Jumel Mansion Museum; Yale University’s Sprague Hall; and numerous other venues in New York and Connecticut.  A past Co-Director and current Artistic Advisor with the chamber music series, “Music at Morris-Jumel,” and a former member of the Manhattan Recorder Orchestra, he also appears as a guest performer on the recordings Northern Lights:  Music by Brunnemüller, Telemann, Bach, and Richter (Quill Classics 1005); The Pleasures of the French:  Music of Hotteterre, Boismortier, Jacquet de la Guerre, Corrette, Couperin, and Barrière (Quill Classics 1007); and The Praying Mantis and the Bluebird:  Flute Music of Beth Anderson (MSR Classics 1434).  In addition, he has performed live on New York City’s WKCR radio and has been heard on WNYC (New York Public Radio).  His performances and recordings have been reviewed positively in American Recorder, Early Music America, and American Record Guide.