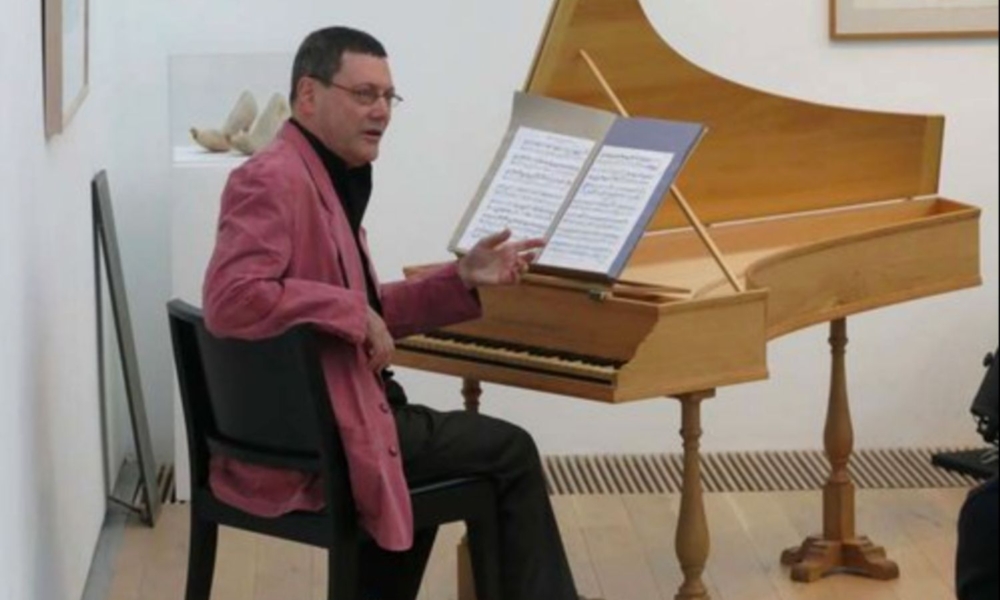 If you’ve actually heard of Johann Mattheson (1681-1764), it’s probably been from his writings on music in the era of Bach and Handel. That, at least, was my own experience until the Boston Early Music Festival in 2005 produced the world premiere of his extraordinary opera Boris Goudenow – written in 1710, a century and a half before Mussorgsky’s opera on the same Boris. And, to add a Wagnerian touch to the mix, Mattheson himself wrote the libretto along with the music.

Since Boris was the centerpiece of the festival, it was only natural that other performers would wade into Matthesonian waters that week, including harpsichordists Matilda Butkas and the eminent Bruckner scholar William Carragan, who presented harpsichord duets and solos, one of which, Fugue X with three subjects, came from Mattheson’s collection of twelve fugues (lightened with a few other pieces) entitled Die Wolklingende Finger-Sprache – The Melodious Talking Fingers. (Booth, in his CD notes, also translates the title as The Melodious Language of the Fingers, which allows for a more singing interpretation of the fanciful title.)

The multitalented Colin Booth – performer, instrument builder, writer, editor, graphic designer – has now brought out a new edition of the Talking Fingers as well as a CD of the entire opus, both under the Soundboard imprint. The sheet music, edited by Booth and Matthew Brown, is based on the edition issued in 1735 and 1737 – and dedicated to George Frideric Handel, with whom Mattheson (patently a character) had once fought a duel.

Booth notes that the composer had elsewhere states, “Any kind of playing is simply an imitation … of singing” and points out that Mattheson’s subjects, though written for an instrument, have a deliberately singable quality. (One thinks also of Bach’s comment, in his description of the Inventions and Sinfonias, about developing a cantabile style of playing the keyboard.)

So it is only proper that in performing these fugues, Booth never forgets the vocal element; Fugue No. 4, in particular, seems almost like a Handelian chorus, which the dedicatee perhaps recognized. Indeed, Booth implies that the notorious plagiarizer might have lifted a theme from Mattheson’s fugue for a chorus in his Messiah.

Bach, for his part, could have borrowed from Mattheson the idea of a collection of fugues, varied with canons, for his Art of Fugue. Mattheson’s fugues on two or three subjects, moreover, might have inspired Bach’s work in that vein for his late, unfinished exploration of fugal possibilities. Unlike Mattheson, however, Bach stuck to one theme, but Mattheson’s work might have provided an impetus. While I’m on the topic of Bach, I should add that the charming final fugue of Mattheson’s collection is based on the same theme as the cantus firmus that Bach used in the piece we know as “Jesu, Joy of Man’s Desiring”.

The fugues range from playful to severe; some are short, others lengthy. Fugue X, built on three subjects, is the longest of the set, coming in at about 9 minutes.

I gather that the harpsichord Booth plays is the double-manual instrument he built in 2016, based on a 1661 original by Nicholas Celini, which Booth himself restored. The recording has a pleasantly natural sound, and Booth’s fingers sing sweetly. This is an important contribution to our understanding of the craft of fugal counterpoint in 18th-century Germany.